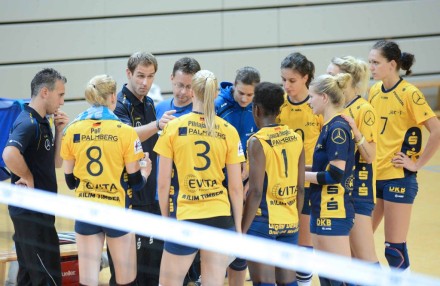 The first game didn’t go that well for the German champions as they lost to France’s RC CANNES in straight sets. Eczacibasi VitrA ISTANBUL had more luck in their CL debut with Czech champions Agel PROSTEJOV as the players mentored by Italian-born head coach Lorenzo Micelli claimed a straight-set victory.

SCHWERINER SC is up to play a better role in this game against the runner-up of the Turkish national league even though it will be a tough match. The pre-favorite seems to be the team of Eczacibasi as their goal is to finish first in the Pool.

SCHWERINER SC seems to have a few problems to deal with right now: they lost many important players at the end of the last season and now they have a brand new and very young team with a low average age of 21 years. This team first has to find themselves before being able to play on a good level. They definitely have the potential to play a good role in the 2014 CEV DenizBank Volleyball Champions League, but head coach Felix Koslowski has a lot of work to do to find the right balance in the team.

Last year Eczacibasi lost in the Playoffs 6 to their compatriots of VakifBank who would have moved on to win the trophy. They didn’t make a lot of changes in their roster but added up some internationals players like the former star of SCHWERINER SC, Denise Hanke, and Chinese wing-spiker Yimei Wang.

However, the players of SCHWERINER SC still hope they can cause a sensation at home like they did last year winning all of their home matches in the League Round to make the Playoffs 12 of Europe’s elite club competition.

Vitamins and minerals do NOT deliver energy