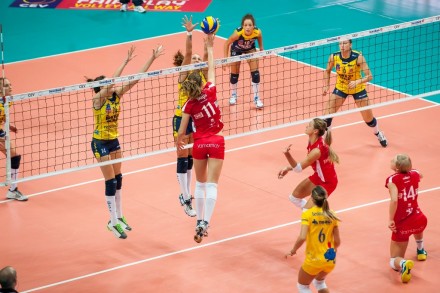 Some 3,000 fans came together at the Palayamamay for the much anticipated Italian derby that was supposed to highlight the second round of the prelims. CONEGLIANO was paced by their Bulgarian player Emiliya Nikolova who registered 23 points in the end and well marshaled by their American setter Carli Lloyd who found the right tempo especially with opposite Valentina Tirozzi. CONEGLIANO also stood out with their blocks – 18 in the end – and even though Unendo Yamamay came back after a slow start, that was not enough to stop the run of their compatriots. Young opposite Marika Bianchini was the best player for the hosts in their losing effort with 17 points – including 3 aces.

CL W: Rabita too much to stand for brave rookie BEZIERS Volley