Unfortunately, medical exams brought only bad news for Saskia Hippe. It is diagnosed that captain of Schweriner ruptured ACL of left knee and injured meniscus as well, so the season is over for her. 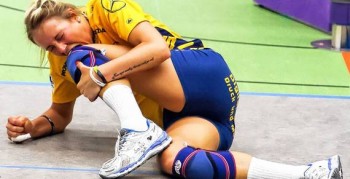 Hippe got injured in a weekend match against Kopenicker Berlin, club in which she started career. This is a huge blow for Schweriner because defending domestic title and competing in CEV Champions League will be really hard without one of the best players.

“This is a major setback for Saskia, but for the team as well. We are now in a difficult situation. Now all other players just have more obligation to step out” – said Felix Koslowski, coach of Schweriner.