Gearing up for the much anticipated home clash this Thursday when the home side of BERLIN Recycling Volleys will face the Russian standout Zenit KAZAN for the Playoffs 12 of the 2014 CEV DenizBank Volleyball Champions League, the likes of the hosts count on an enthusiastic and vociferous crowd as they reencounter the Russian giants after two memorable knock-out phase matches last season. 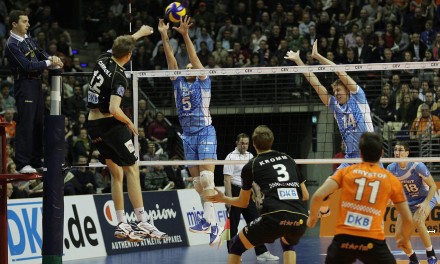 It’s been exactly one year after the enthralling first round of action of last season’s Playoffs 12 and both teams will again face each other in the first knock-out round of Europe’s elite club competition. One year ago, the team of head coach Mark Lebedew not only stood up to the clear-cut favourite of the match but was indeed on the edge of a sensation being on match ball in the tie-break. However, the hosts missed out on the opportunity to upset one of the world’s best teams (25-27, 25-23, 25-17, 16-25, and 16-18). Even the re-match was closer than expected – the group of head coach Vladimir Alekno however, eventually retained the upper hand in the fifth set (25-15, 21-25, 28-30, 25-13, and 16-14) inflicting a bitter loss to Germany’s champions.

“Playing KAZAN again is kind of a nice surprise for us”, Lebedew says with a chuckle. The head coach still gets something positive out of the Playoffs 12 DOL as he says: “On one hand we had hoped for another, less strong opponent, but on the other hand we now have the possibility to compete against a top team.”

And indeed the guests of Zenit KAZAN – fivefold national champions (2007, 2009-2012), threefold cup (2004, 2007, 2009) and super cup winners (2010-2012), and two-time Champions League winners (2008, 2012) – have had a very successful season so far. Coming out first of the “group of death” in the prelims of this year’s Champions League against the Italian standout Lube Banca Marche MACERATA, the Russian Champions League title holder Lokomotiv NOVOSIBIRSK and the Austrian rookie Posoiilnica AICH/DOB, the group from Tatarstan is still unbeaten in the Russian Superleague where they top the standings.

“Zenit definitely is a team you have to regard highly”, Lebedew says, adding: “but we also trust ourselves to achieve much. We’ve proved to be in good form when defeating strong opponents recently. That was the best practice for the up-coming clash against KAZAN.” The Australian mentor however not only counts on his team’s form but also on the always great support of the crowd at Max-Schmeling-Halle: “I hope this match to evolve to an ardent home clash with many spectators vociferously cheering us on”, Lebedew says, adding: “Our fans can enhance our chances on Thursday enormously!”