On Tuesday, February 4 Germany’s sensation TV Ingersoll BÜHL will play France’s PARIS Volley in the Challenge Round of the 2014 CEV Volleyball Cup – Men. 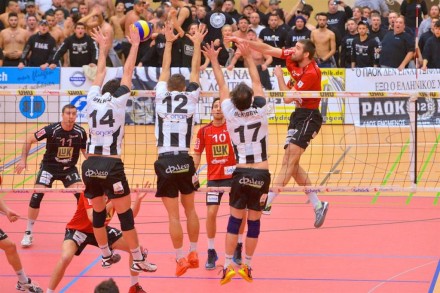 This is another challenge for the German rookies who nevertheless feel ready to take on PARIS Volley and who will be accompanied by some 70 fans travelling by bus to France’s capital city to attend the match taking place at the Salle Charpy. “We know that the match with PARIS will be the most difficult game for us so far in the competition” says TV Ingersoll head coach Ruben Wolochin. “It is a very good team and they have performed strong so far this season. We are the underdog going into this game, so I think we have nothing to lose and can play free of any pressure” he adds.

PARIS Volley is a leading force in France as the team has won the national league eight times over the last 13 years. They currently top the standing there and count on a mix of French and international players, including German libero Markus Steuerwald. PARIS Volley started their season participating in the 2014 CEV DenizBank Volleyball Champions League ending up the prelims in third place but being in contention for a spot in the Playoffs up to the last round of Pool play.

As they play PARIS Volley, the young players mentored by head coach Ruben Wolochin will try to add another chapter to their successful debut in the European Cups. They will be well rested before they travel to France as they have no other game on schedule this weekend for the Bundesliga. Their young and rising star Björn Höhne will be among the ones to watch out for.