The first signs of the impending clash between some of the world's elite volleyball players in this weekend’s FIVB Volleyball World League action in Frankfurt was evident in the main pedestrian area of the city on Tuesday with German national team players Georg Grozer and Ferdinand Tille taking on a particularly powerful opponent: a machine that fires the ball at 130km/h. 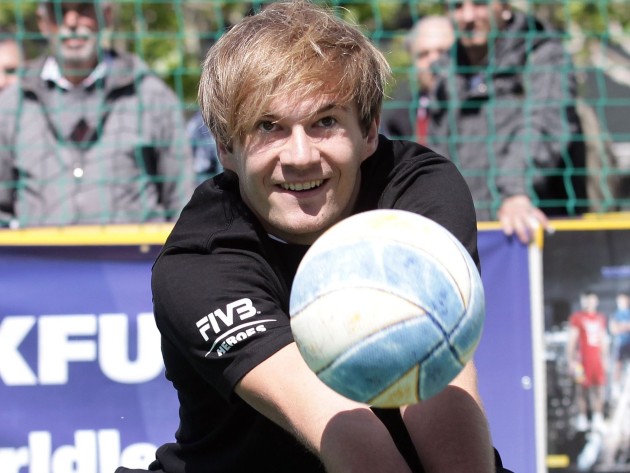 Alongside with coach Vital Heynen, they pair also discussed what makes a good volleyball player and why it is so important to get up again and again – both on the court and in everyday life.

Ferdinand Tille, who was named best libero at the 2010 FIVB Volleyball Men’s World Championship in Italy, was emphatic: “Volleyball is a very energetic and powerful sport. As a libero, I am constantly under attack during a game. It’s a big responsibility I have for the team performance, but one I am happy to shoulder.”

It wasn’t just the volleyball professionals who got to face the ball-firing machine -students, fans and passers-by were invited to try their luck – albeit at a reduced speed. The best moves were rewarded with free tickets for the preliminary round of the FIVB Volleyball World League in Frankfurt.

From May 25 to 27, the men’s teams from Germany, Argentina, Bulgaria and Portugal will go head-to-head in the Fraport arena. For the Germans, it will be an important test ahead of the opportunity to qualify for the Olympics in Berlin from June 8 to 10 Heynen made clear during a press conference at the event: “The German men’s team has great potential. Following our bitter defeat to Italy on Sunday [in the CEV Men’s Continental Olympic Qualification Tournament], we are now looking optimistically towards Berlin. In front of a home crowd and with the support of the fans, our motivation to book that ticket to London is huge.”

Ferdinand Tille, who in July 2011 was inducted into the FIVB Heroes team by the FIVB, and has since been active as an ambassador for the sport, also emphasised the importance of the Olympics: “Taking part in the Olympics is everyone’s biggest goal. Firstly though we need to deliver a good performance here in Frankfurt, and make the fans hungry for more.”

Fellow FIVB Heroes Facundo Conte from Argentina and Matey Kaziyskiy from Bulgaria will join Ferdinand Tille on the court from this Friday to Sunday.