After an exciting opening weekend, the 2012 FIVB Volleyball World League continues this Friday with all eyes on Germany, Bulgaria, Argentina and Portugal Pool D as it begins in Frankfurt, Germany. 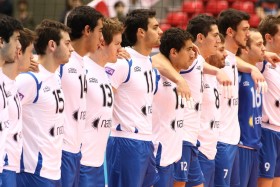 All four are eager to begin on a high note after watching the other 12 teams start their campaigns last weekend, with Argentina and Bulgaria starting favourites while Germany will be counting on their home support and Portugal will bank on a few upset victories.

Germany will hope their home support will give them an extra boost as they begin their World League. They have a new coach in Vital Heynen and will see the tournament as a pre-cursor to their quest for a London 2012 Olympic Games berth.

The hosts have a 3-1 win-loss record overall against Portugal and have never lost to Argentina in a FIVB tournament in the five matches they have contested. However, Bulgaria pose a big threat having lost nine out of the last ten 10 encounters with their European rivals.

-Yet to lose to Argentina in the World League

A young Argentina side surprised many by almost claiming a bronze medal during last year’s World League, losing out to Poland in front of their home fans, so they will hope their dismal disappointing performances against Germany and also Bulgaria – who they have never beaten in World League competition – are a thing of the past.

-Beat Bulgaria for first time in World League history in 2011

Bulgaria come into the competition with little pressure as they are assured of a place in the Finals as hosts. But they will want to bounce back after missing out on Olympic qualification through the CEV Continental Olympic Qualification tournament.

Radostin Stoychev remains in position as coach and will be keen to prove a point.

Portugal out for an upset

Portugal, having seen the form book turn on its head in a few of last weekend’s matches, will be keen to add a few surprise victories of their own in Frankfurt. They have never beaten Bulgaria in a FIVB tournament, have a 1-3 win-loss ratio against hosts Germany and last defeated Argentina during the 2002 World League. However, they also don’t have the pressure of an Olympic Qualification tournament to prepare for so will look to play with freedom.

-Have lost their last matches against all three other pool teams