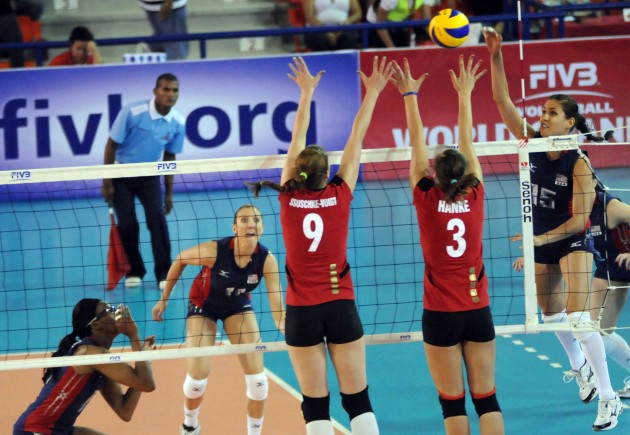 Destinee Hooker led the American offense with 20 points including five blocks. Foluke Akinradewo added 16 while Christa Harmotto and Jordan Larson contributed 14 and 13, respectively. Germany had Maren Brinker and Margareta Kozuch in double digits with 14 and 13.

The strong net defense of USA was one of the keys for the victory as they scored with 20 blocks to only 10 by Germany. Both sides had eight serving aces.

It was a close affair early in the first set with Germany taking an 8-7 lead with a spike from Brinker. Two consecutive attacks by Beier increased the gap to 10-8. The Americans tied up with a German error followed by a block by Tom. Hooker hit a blistering spike for a one-point USA lead at 14-13 and the Americans arrived at the second break leading 16-13 with a spike by Larson followed by Hooker’s block. When play resumed, a block by Larson forced a German time-out. Things didn’t get better for Germany as Larson continued attacking while the Americans established a high wall and moved into a 20-13 advantage. An ace by Miyashiro coming off the bench sealed the set 25-17.

The Americans opened a three-point lead in the early stages of the second set and expanded it to 5-1 with a soft tip by Larson. Akinradewo scored with a huge block and German coach Giovanni Guidetti called time-out at 1-6. Akinradewo followed with a quick attack down the middle and Hooker hit a massive cross-court spike for an 8-2 lead at the first technical time-out. After another USA block, this time by Harmotto, Germany called time at 10-3. Kozuch’s attack from the back, followed by an American error, shortened the gap to 15-10, but Akinradewo responded with a furious spike for a 16-10 margin.  A couple of spikes by Kozuch and Beier gave Germany something to cheer but Hooker finished with a thunderous spike at 25-15.

Some sloppy play from the USA capped by a spike by Brinker gave Germany a 4-0 lead. The Europeans increased that to 7-0 with consecutive blocks by Furst and Kozuch and went to the first TTO leading 8-0 after a bomb by Kozuch. Hooker scored the first USA point of the set at 9-1.  McCutcheon called time-out at 11-1 following a big spike from Brinker. The Americans rallied to shorten the difference to 12-7 but Furst scored three points in a row with a block and two aces. Akinradewo and Kozuch traded spikes and Germany led 16-8 at the second TTO.  The Germans made a series of errors that allowed the Americans to close the gap at 20-15. A spike by Hooker combined with a German mistake shortened the gap to only two points. At 24-20, Hooker hit another bomb and continued with an ace. Larson hit for 24-23, but Kozuch came from the back court with a missile to seal the set 25-23 in favor of Germany.

USA led 8-6 at the first TTO of the fourth set and improved to a four-point lead with two floating aces by Harmotto. Tom extended the gap to 13-8 and Hooker followed with a massive block. Brinker and Hooker exchanged bombs and then Hooker scored with a soft tip for a 16-9 advantage. The Americans never looked back and finished with a bomb by Hooker.