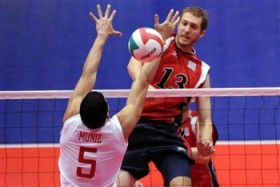 Theodore “Theo” Brunner played for two years in one of the best leagues in the world, the Serie A in Italy.

Before his arrival to Unterhaching, the 27-year old Californian, played for Erstligaabsteiger CMC Ravenna and Verona. “He is very a dynamic player, and has a strong attack“, Mihai Paduretu outlined the qualities of the new team member.

The 204 cm tall American player moved from the USA to Europe in 2008, and his first contract was in Greece.

“I played with Vince Devany for a year at the University of Santa Barbara, and I know Steve Keir. Keir advised me to transfer to Unterhaching. I also know Kosti Shumov from Hachings. He’s a great player“, said Theo.

His thoughts about the reasons for transfer were: “In Greece and Italy, I played for clubs who completed their seasons always in the middle or bottom of the table. It was a challenge when I first came to Europe, but now I would now like to play for a team capable of wining a title. I always knew that the top German teams were Haching and Friedrichshafen.”

“I would like to return to the U.S. national team next summer. My goal is to participate in the Olympics 2016 in Rio de Janeiro. I hope that my role at Generali Haching will bring me one step closer to this goal“, said new Hachings’ middle blocker.

Reply Retweet Favorite
New Book: “11 Ways to Get an Edge: Lessons from My Journey to Help You Become a Mentally Bulletproof, Joyful, and E… https://t.co/LdiS0QFaPD