The goals set for the past season by VfB FRIEDRICHSHAFEN were pretty clear: making it to the Playoffs of the CEV Volleyball Champions League, claim the national league and retain once more their title in the Bundesliga. 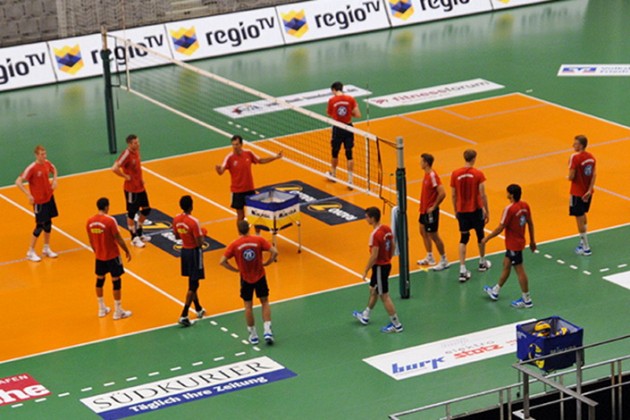 Two of these goals were eventually achieved at the end of the season. However, this is not enough for the coming campaign, where the club longs for more, namely to finish atop of the standings in all domestic competitions and qualify once again for the Playoffs of Europe’s most elitist competition.

The showcase of the side from the Bodensee includes twelve wins in the Bundesliga, eleven in the national cup and the 2007 CEV Volleyball Champions League. The goal – openly disclosed – is to add at least a couple of more honors to this impressive list. “Of course we want to win the national cup and the Bundesliga” says head coach Stelian Moculescu.

In order to fulfill such an ambitious plan, VfB FRIEDRICHSHAFEN has strengthened the roster for the coming season by adding up 208 cm tall Max Günthör, who has opted for the club based on the banks of the Bodensee after rejecting some offers from abroad. “I am very happy that Max has decided to join our team” adds Moculescu. Günthör switched from one of the closest rivals of VfB FRIEDRICHSHAFEN, Generali UNTERHACHING, and recently participated in the London Olympics with Germany’s national team.

The club has also contracted José Rivera from Puerto Rico, Victor Batista of the Dominican Republic, and youngster Yannick Harms to support Brazilian Idi as outside hitter. Günthör joins middle blockers Joao Jose and Matthew Denmark, while two young diagonal players will also star for VfB FRIEDRICHSHAFEN in the coming season, Austria’s Thomas Zass and Anastasios Aspiotis from Greece. Setters Juraj Zatko (SVK) and Nikola Jovovic, plus liberos Nikola Rosic (SRB) and Thilo Späth were all confirmed as part of the roster.

In the prelims of the 2013 CEV Volleyball Champions League, the “Häfler” will cross once more their ways with last year’s winners Zenit KAZAN of Russia, who were even defeated once last year at ZF Arena. The other opponents are Hypo Tirol INNSBRUCK of Austria and Belgium’s Knack ROESELARE. “We look forward to the start of the season and to many highlights for the joy of our fans” says Managing Director Jürgen Hauke.

GER W: Another defeat of Schweriner!