The agenda for the FIVB Congress and the voting procedure for the elections which are due to take place during the Congress on Friday were approved by the FIVB Board of Administration during its pre-FIVB-Congress meeting at the Disneyland Hotel on Monday. 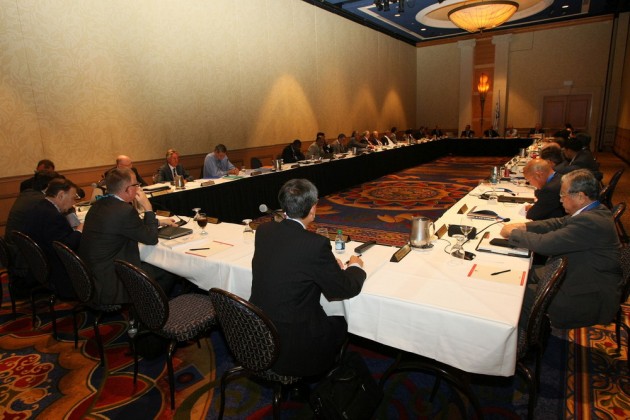 The FIVB Board of Administration

The FIVB Board of Administration, which also included the newly elected Board members and presidents of the FIVB Commissions and Councils, were unanimous in their approval of the election process for both the FIVB Presidency, where three candidates – Mr Doug Beal (USA), Dr Ary Graça (BRA) and Mr Chris Schacht (AUS) – will run for election to be FIVB President from 2012 to 2016 and the two minority gender positions on the FIVB Board of Administration where another three candidates – Mrs Marta Centeno O. De Sajche (GUA), Mrs Vilja Savisaar-Toomast (EST) and Mrs Rita Subowo (INA) – will run.

Each candidate will have 15 minutes to present their candidature to the Congress while the voting procedure for the FIVB President will consist of the following:

The 33rd FIVB Congress will be the “first democratic election” for the FIVB according to FIVB President Jizhong Wei who will not be standing for relection, with three candidates standing for election.

The FIVB Board of Administration also showed great solidarity in approving for proposal to the FIVB Congress all amendments made to the FIVB Constitution and Regulations.

The meeting started with Mr Beal, the president of the host federation USA Volleyball, welcoming all the members, before President Wei thanked USA Volleyball and the city of Anaheim with the cooperation of the USOC.

“During my four year term I thank you all for the confidence you put in me,” President Wei told the Board members. “I have been trying my best to do something I could do. Now I recognise also that I could not do better so voluntarily, and with pleasure, I will step down to give the baton to the new board because you can do better to lead the FIVB and to open a new era for the FIVB”.

“We may have different opinions but we have mutual trust, this is a legacy created by you all in the FIVB. We can’t do something in one minute, in one meeting so in the FIVB the reform will continue. There should be more reform, not less”.