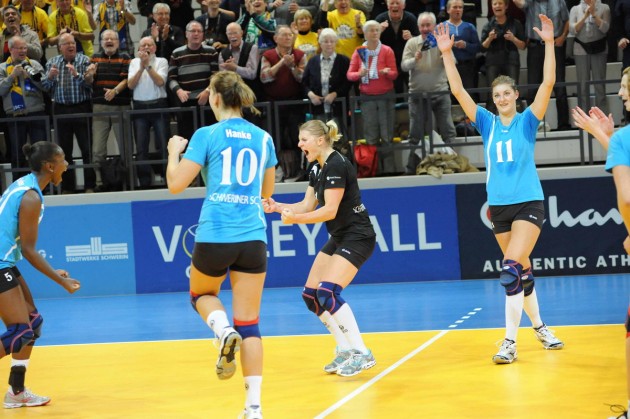 Both teams started the math by studying their way of playing. Even though the supposed winner of the game, Dinamo KAZAN, was intimidating the local heroines in the beginning, the ladies around head coach Teun Buijs could catch up and come back with great quality and motivation. Dinamo KAZAN brought the opening set home with the score of 25-21 but supported by the local crowd, SCHWERINER SC got to the front mainly via the contribution of Denise Hanke.

After a terrific 7:0 break in the early phases, the home side quickly pocketed the second set with the score of 25-14. SCHWERINER SC could extend that great momentum also to set 3 claiming a very close final rush (25-23) but Dinamo fought back in the next section of the game (21-25) to call for the tie-break.

That was a very sensitive moment and SCHWERINER SC started out well, once more being anchored by Hanke, and went up 8:6 as the teams switched sides of the court. The tension was to be perceived in the air, both teams made mistakes but SCHWERINER SC found a way through the Russian block to claim a rather unexpected 3:2 home win over the Russian giants (15-13).

ARG W: 15 Teams ready for the 3rd round of the Argentine A1 League