VfB Friedrichshafen tear down everything in front of them this season. 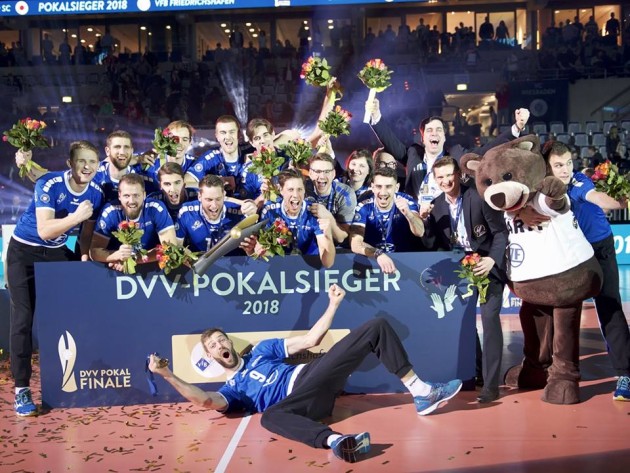 VfB Friedrichshafen swept Volleyball Bisons Bühl in the final of the 2018 German men’s volleyball cup (DVV-Pokal) by a 3-0 (25-20, 25-8, 25-21) to win the trophy in the tournament for the 15th time in the club history, second in a row. In addition, the “Häfler” scored the 31st victory this season including all competition, without suffering a single defeat.

Philipp Collin topped the Friedrichshafen with 11 points (3 kill blocks, 80% attack – 8/10) while Japanese Masahiro Yanagida scored 13 points for Bühl, and earned the Man of the Match award by the fans’ choice.

The final match was held at SAP Arena in Mannheim in front of 11,354 spectators.

“I am satisfied. I think we played clever and patient, even when we were trailing. Our strengths in defense could be seen today. Until the middle of the first set, it was very interesting, then Bühl made more mistakes and we were more consistent. After the second set, we were a bit too confident and made more mistakes in the third set than before,” Friedrichshafen coach Vital Heynen said.

TUR M: Halkbank save honor of favorites in playoffs opening