France needed only sixty-six minutes to edge Azerbaijan in straight sets as the team coached by Serge Marouteau is fighting for making it to the final round of the 2013 CEV Youth Volleyball European Championship – Girls. 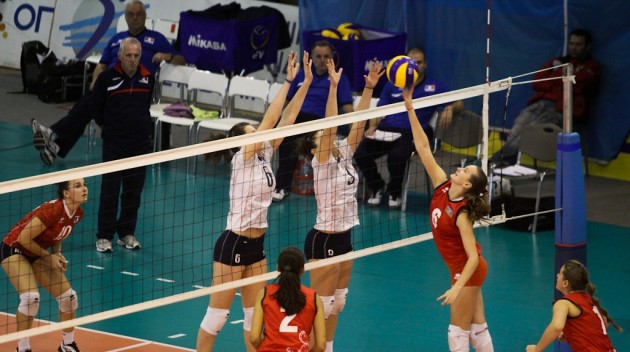 France’s performance was paced by 8 aces in the first set where the girls playing today in white jerseys quickly cruised to the front (5:1, 11:3 and 20:9) while five more winning serves were registered in the second set. France killed there also four blocks to re-assert its supremacy all the way through (5:0, 17:3, and 25-9) before Azerbaijan – the real surprise of the past days, especially after their win over Spain – attempted to surge back in the third set. The score was tight up to 11:9 but pushed by some twenty colorful fans from the stands France’s girls did not lose control of the game and could rapidly pocket their third consecutive win in the tournament.

After a minute of silence was observed to commemorate the memory of Nikos Samaras – a former captain of the men’s national team who had suddenly passed away on Friday – Greece’s girls did delight the home crowd in Volos by cruising to their third consecutive victory, thereby emulating France to keep an immaculate record in the tournament. Greece edged Spain in straight sets (25-16, 25-12, and 26-24) by registering 8 aces and 11 blocks in this game. Team captain Olga Strantzali anchored Greece in the first two sets before Spain fought back in set 3 but missed out on a few opportunities to prolong the game and after a couple of errors by Sara Folgueira, Greece could seal the final 3:0. “In the third set we relaxed and lost focus but in the end we got what we wanted and this is what really matters” said Greece’s Alexandra Psoma, while her opponents from Spain – after a third consecutive defeat – looked frustrated as their chances to progress to the final round of the European Championship have definitely vanished.

In the last match of the day Finland beat Denmark 3:1 (25-15, 27-25, 23-25, and 25-18) to claim their second win in the tournament and play Greece on Sunday for what may be the deciding game to eventually assign a ticket to the final round. Finland easily pocketed the first set as Denmark was not able to stand their pressure from the serving line; however, with a series of good blocks, Denmark stepped up in the second set but it was Finland that sealed the final 27-25 for the 2:0. With their block the Danes could finally seize their first set in the tournament (25-23) but Finland got back control of the operations in set 4 opening with a splendid 5:0 run to go for the final 25-18 and 3:1. “Even though we did not play good, I am happy with the result” said Finland’s mentor Aapo Rantanen. “Our match with Greece on Sunday will decide whether we can make it to the final round or not. We know Greece and we beat their junior team this past April, so there might be a Finnish ghost going around on their minds”.