Czech Republic and Germany could score their third and second consecutive win respectively as they are currently trying to clinch a ticket to the final round of the 2013 CEV Youth Volleyball European Championship – Girls via the qualifier that is taking place at “Vodova” sports hall in Brno. 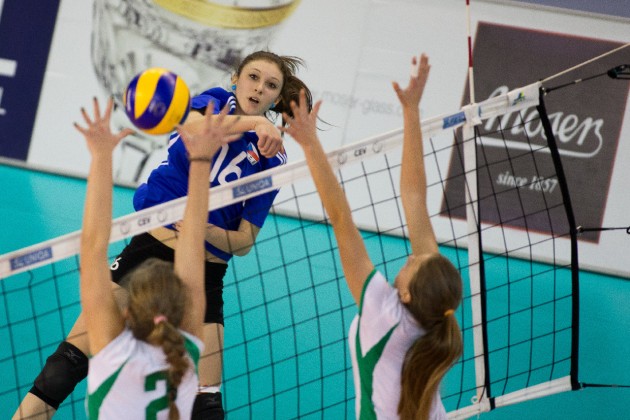 The Czech Republic easily downed Lithuania in straight sets (25-14, 25-9, and 25-21) to stay atop of the standings with nine points after three matches. Michaela Mlejnkova paced the home side with 26 points in only three sets, as she attacked with great efficiency, served well and did a good job also in defense. After claiming the first two sets quite easily, head coach Leos Chalupa opted for his second lines with Anezka Sebronova, Karolina Vankova and Eva Hudylivova joining the game. Still the Czechs could finish it off in straight sets for their third win in the tournament.

“We did score another win and had the chance to test some other players and although we did not play that good in the last section of the third set, we can be happy with our nine points. We have a rest day on Sunday and we can prepare carefully for our last match with Germany on Monday” said Czech mentor Leos Chalupa after the game.

“We did not show our best as we had done with Hungary as we adjusted our play to the level of our opponents and to the development of the game but it is important that we claimed another win. We do enjoy playing here in Brno because players and fans can create a nice atmosphere together. I am grateful to our parents who are always supporting us from the stands” said Czech opposite Anna Sucha.

“I can only say that the Czechs played better Volleyball than we did; they are taller and stronger, so they deserved this win. Tomorrow we have a crucial match with Portugal and we’d like to claim our first win in the tournament” stressed Lithuania’s head coach Jolita Kontvainiene.

In the other match of the day Germany also needed only three sets to cruise past Portugal (25-21, 25-17, and 25-20). Wiebke Silge was once more Germany’s most prolific scorer with 12 points that include also six blocks and one ace. Even though they were always cheered by their head coach Gilda Harris, Portugal’s girls could not stand the quality displayed by Germany especially in attack and blocking (13 vs. only 6).

“Our performance today was much better than in yesterday’s first match but we still have some problems in reception. We also did not display the necessary aggressiveness in attack and since the Czechs are currently playing excellent Volleyball, I think our goal may be to finish second in the group” said Germany’s mentor Jens Tietböhl. “There is still room for improvement but Portugal played well today. We are fully focused on our next match with Hungary on Sunday, there is still time for the final clash with the Czechs” added team captain Steffi Kuhn.

“We played well but the Germans were simply better. We fought but in the deciding moments our opponents scored the key points, especially with their block” said Portugal’s mentor Gilda Harris. “We do not surrender as we still want to beat Lithuania and Hungary in the next matches and I think we can surprise our next opponents” concluded Portugal’s leader Ana Martins.