ECJ M: Greek team looks forward to a day of rest after dominating over Denmark

In yesterday’s second match in Pool II the debutant Danes faced Greece. Though Greece had lost a tough tie-break against Bulgaria on Saturday evening they seemed fresh and fit. Both teams fought hard and though Denmark won their first set ever in a Junior European Championship, Greece seized the match 3-1 (25-19, 17-25, 28-26, 25-21). 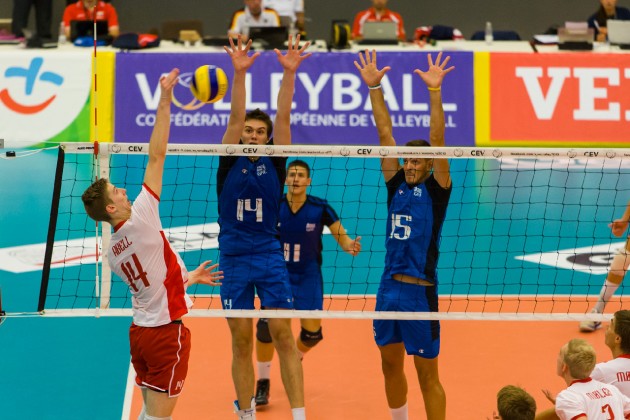 In the first set the teams were close at the first and second technical time-out (8:7 and 16:13). From here Greece increased their lead and won the set 25-19.

In the second set the air seemed it had gone out of the Greek balloon. After Denmark took the lead at 3:2 they did not let go of it. Especially captain Peter Trolle Bonnesen found his way through the Greek block. Denmark increased their lead and won a well-played second set 25-17.

The third set became a close encounter. Denmark had a one-point lead at the first and the second technical timeout (8:7 and 16:15). Fighting bravely Greece leveled the set at 20:20. The Greeks got in front 22:20, but then they made a formation error which gave Denmark the lead 21:20 instead of being behind 20:22. All level until the very end of the set which the Greeks won 28-26. The Danish team had lost the focus in the beginning of the fourth set where Greece was in front 8:2 by the first technical time-out. It became 12:4 to Greece before something got into the Danes. Suddenly the blocks were tight and the smashes hard and precise. At the second technical time-out the Greek led 16:11 and Denmark came all close at 16:18. At 23:21 the set seemed it could go either way but the Greek team showed great mental strength and won it 25-21 and the game 3-1.

Greek head coach Stylianos Kazazis: “It was a tough game, especially after our long game against Bulgaria yesterday which we lost. Denmark was very strong today and played better than in their two previous matches. Both teams showed good mind and soul and fought hard. Congratulations to Denmark for a good game where they fought to the very end. Now we are looking forward to a day of rest”.