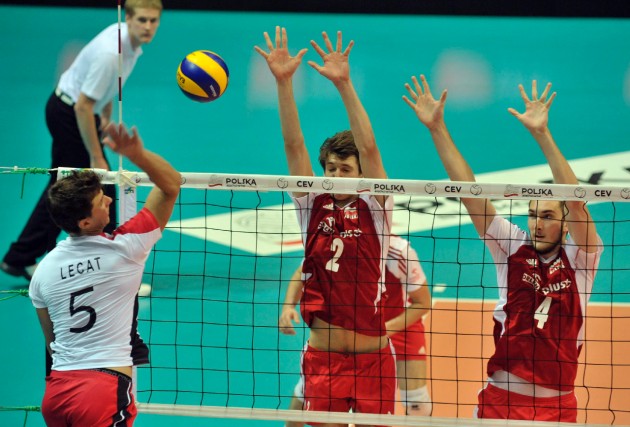 Poland and Belgium crossed their ways on Sunday evening after claiming two wins in their opening matches with Finland and Serbia. The Poles started a little bit nervous while Belgium was brilliant in the early phases of the game. Even though Bartlomiej Krulicki and Lukasz Lapszynski played really well from the middle, it was Belgium that got 4 points of advantage at the first technical time-out (8:4). Belgium played fast balls that the Poles couldn’t defend (10:7). The Poles tried to catch up but Belgium remained focused (16:10) and even three substitutions in the Polish team couldn’t avoid the final 25-17 for the guests.

The second set started without signs of supremacy of any team. It lasted until the first technical time-out when Belgium went up 8:7. The Belgians showed that their win with Serbia was not coming from anywhere and their actions might bring head coach Steven Vanmedegael a lot of satisfaction. Francois Lecat was the leading figure at the net as well as from the serving line. The Poles, however, started to play more effectively and went ahead in the next actions. Maciej Muzaj’s attacks together with his aces got Poland leading at the second technical time-out (16:14). The distance, unfortunately for the Belgians, was only getting wider and resulted in a 20:14 just after Lukasz Lapszynski’s attack. Despite great Belgian attacks from the middle, the Polish block lead by Jan Nowakowski felt no harm. The last actions were a one-man show for Maciej Muzaj and resulted in Poland finishing this set at 25-20.

The beginning of the third set looked favorable to Belgium. They were very strong in blocking and scored three points via this element (4:1). However, a few minutes later their own mistakes let the Poles draw (4:4). Francois Lecat was not shining as before and the game of the Belgian team was shaky. Muzaj’s ace let Poland take the advantage by the first technical time-out (8:7). Both teams made a lot of mistakes, but finally Vanmedegael’s side after an ace by Lecat was closer to win this section of the game (19:16). Nothing could stop Belgium – they were more concentrated than Poland and deservedly pocketed the final 25-22.

The fourth set showed that even though the players were fighting with their fatigue, emotions among the youngsters were still high pitched. The score was often changing, with Poland up 11:8 before Belgium got to the front at 17:14 and 19:17. At that moment Poland woke up and made it 19:19. Marcin Janusz served an ace to push his side ahead (21:19) and the confidence it brought was clearly visible among the young Poles and resulted in having some points of advantage until the end of the set (24:21). The tie-break was somehow presented to Poland by a Belgian service error.

Lifted by this good result Poland started the tie-break really well (4:1), but quickly lost their concentration which resulted in coach Nawrocki taking a time-out (4:5). Mistakes of the guys in white and red jerseys and Belgium‘s good game, especially in blocking, as well as Lecat’s serves let the guests widen their lead to 8:5. Lapszynski finished an attack and shot an ace to make it 8:7. However, the consistent game displayed by Belgium dominated the scene in the next phases and Jonas Reynders finished the match with an attack from the right wing (15:11).

ECJ M: Greek team looks forward to a day of rest after dominating over Denmark