A real marathon – lasting for more than two and a half hours – followed on Sunday afternoon as Italy fought their way back from two sets down to eventually defeat Finland 3:2 thereby scoring their second consecutive victory of the tournament (19-25, 33-35, 25-23, 25-18, and 15-12). The second set was absolutely thrilling with Italy missing on a set ball and Finland on ten (!) before the Suomis could seal that deal at 35-33, but Italy was in good shape to surge back and win at the tie-break. 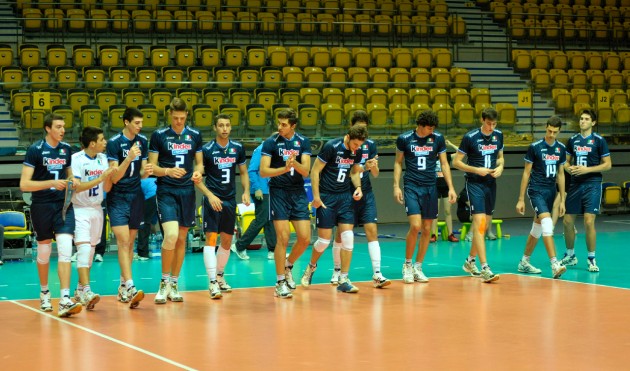 Coming from their outstanding win over Russia in the opening day, Italy got its second task in Pool I by playing Finland, the side that on Saturday night was defeated 1-3 by the hosts of Poland. This game was a remake of the match played this past April in the second round qualifier held in Bar, Montenegro, and that was claimed by the Finns with the score of 3-1.

Finland started out strong and enjoyed a pretty comfortable margin by the second mandatory stop (16:9), and even though Italy gradually found their way into the game, they still could not produce the same intensity and quality that had illuminated their fabulous performance against Russia. They reduced the gap to four points (23:19) but supported by a small group of loud fans the Finns stayed cool and could thank Luca Borgogno for a mistake that sealed the final 25-19.

The match remained close in the second set up to 11 all before Finland changed gear once more, displaying some spectacular actions especially in defense and making it difficult for the “Azzurri” to score. Even though coach Bonitta had re-shaped his starting six almost completely, Italy still trailed 17:20 as the deciding phases of the set were approaching, but their top scorer Luigi Randazzo eventually found back the right grip to call for a tie at 20. Italy leveled once more at 22 on a slightly contested ball attacked by Sandro Caci, but Finland missed out on a set ball as Tommi Siirilä served long. Randazzo was just merciless and he eventually took his side to the front by finishing an attack from the back row, Diamantini served into the net, Karl Külaots pocketed a second set ball for Finland but Mauri Kurppa missed the next serve. Finland could not capitalize on seven more opportunities for the 2:0, but the tenth attempt was successful, with the set ultimately ending with the incredible score of 35-33.

Italy apparently suffered of that knock-down as Finland opened set 3 with a flying 5:1 but their fighting spirit was not yet gone, with the scoreboard showing a 9:9 only some five minutes later. Italy even cruised past by the second technical time-out (16:14) but Finland promptly restored the balance at 17 all. Another close ending was approaching with the “Suomis” moving up 22:20 to assert their ambition to go for a possible win in straight sets. Bonitta briefly stopped the game and the score was leveled once more at 23 on a Finnish mistake… Was there going to be yet another marathon like in the second set? Not really, as Finland spiked long once again to help the Italians get their first set ball and a single block finished it at 25-23 for the “Azzurri”.

Italy stretched that good momentum to set four (8:5, 12:6) as Caci and Randazzo were dismantling their potential in offense but it was still a long way to go to make it to an eventual tie-break. By the score of 19:15, the Italians looked really “BI” and motivated to pursue their goal to turn the course of the game completely around. Randazzo, a former judoka in his youth, anchored his side with firm determination to a 25-18 that called for the deciding fifth set.

Finland opened there with a 3:1 that nevertheless did not discourage the Italians, who quickly drew level at 3; Italy’s chase started again as the teams changed sides of the court (8:6 for the Finns) while the hall in Gdynia was getting crowded with Polish fans waiting for their heroes to play Belgium in the last game of the day. Randazzo fired back Italy to -1 (9:8), the 9 all was there with an ace of Izzo; the players were evidently feeling some fatigue after such an intense match but after some more emotions Italy could complete their comeback from two sets down to score a second win in Gdynia (15-12).