GRE M: Olympiacos and Iraklis with the victories

Olympiacos won the game against Milonas as it was expected by 3-1 though it was not a very easy win for Olympiacos. Iraklis took the game in the tie break in the conflict against Panathinaikos, a win that was very unexpected under the circumstances. 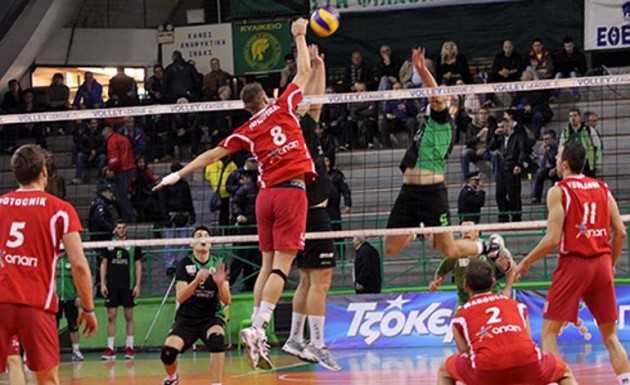 Olympiacos seemed to have underestimated its opponent and got into the game without rhythm and energy, and Milonas on the other hand looked Olympiacos into the eye and took the first set. Olympiacos coach, Dimitris Kazazis decided to change its middle blocker Milan Jurisic instead of George Papadopoulos and that made a lot of difference in the way Olympiacos played, the block was stronger and better attacks. As a result Olympiacos was improved and won the following sets although Karanikolaou of Milonas with his good service caused a lot of problems for Olympiacos’ receivers.

Iraklis took the game in the tie break (2-3) in the conflict against Panathinaikos, a win that was very unexpected under the circumstances.

Panathinaikos took the first set quit easily but at the return Iraklis was better, improved, with less errors and made the tie. Next set Panathinaikos was better in the center and at position 4 so the team from Athens took the set. At the thrilling fourth set Panathinaikos was a better team but suddenly something changed, they made a lot of mistakes and although they were 6 points ahead, Iraklis turned around the set and took it by 20-25! At the tie break, Panathinaikos seemed to have lost its belief to itself after what have happened on the fourth set. Panathinaikos’ coach Stelios Kazazis changed the setter but the game was seemed beyond reach for them, so Iraklis won the game.

Look who’s back to Panionios – volleyball...