CEV CL M: CUNEO joins bunch of teams with perfect record at the end of prelims

Bre Banca Lannutti CUNEO completed its run in the prelims of the 2013 CEV Volleyball Champions League – Men with an immaculate record of six wins in as many matches after claiming the last game scheduled for Pool G and edging Remat ZALAU. 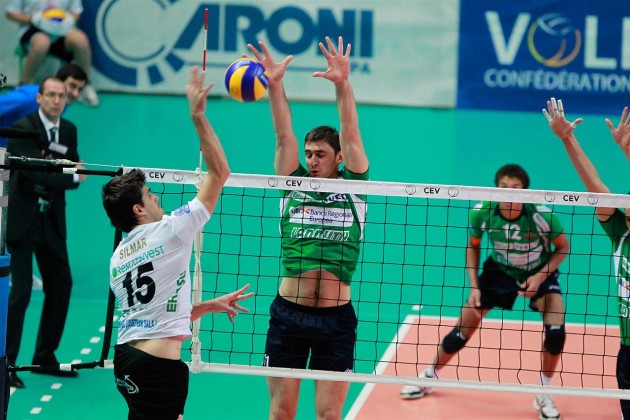 Head coach Roberto Piazza opted for a different starting six as Wout Wijsmans, Nikola Grbic and Luigi Mastrangelo did not join this game. With setter Nimir Abdel-Aziz joined by opposite Tsvetan Sokolov, the starting line-up was completed by spikers Earvin Ngapeth and Dore Della Lunga, middle blockers Emanuel Kohut and Andrea Rossi, plus libero Marchisio. Bre Banca Lannutti started the match very well rushing to a 15:10 lead and maintaining that advantage (16:12 and 18:13) also later in the set, but Remat found the right rhythm and drew level at 19 with Gheorghita. After a very close final rush and continuous turnarounds, ZALAU could bring the first set home with the score of 29-31.

In the second set Bre Banca Lannutti started with Antonov for Sokolov and Remat with Nagy for Pascan. The guests quickly went up 6:8 but CUNEO responded by drawing at 10, before moving to the front at 12:11 and 16:14 by the second technical time-out. The Italians then claimed a margin of five points that Remat could not compensate for and the provisional 1:1 was quickly there (25-20).   CUNEO stretched that momentum also to the third set (8:5 and 12:7) quickly widening the gap to 16:7 with four aces contributed by Abdel-Aziz. Some substitutions on both sides of the net did not change the plot of the game and CUNEO seized that section of the game with a terrific 25-12. It did not change at all also in the fourth set with CUNEO opening with a splendid 7:0 run that paved the way for the final 25-18 and 3:1 win.

“Tonight I have seen a team that is improving match after match” says CUNEO mentor Roberto Piazza. “It is important that every single player can contribute to our success also in the European Cups. I can’t wait for the DOL, I hope we’ll get a good team because this is important to stay as motivated and concentrated as we are”.

“We didn’t find our game in the third and fourth set. Against a team like CUNEO we wanted to fight more but we couldn’t. Congratulations to our opponents and good luck for their next games. We will focus on our national league” stresses Remat captain Robinson Dvoranen.