On Tuesday Italy’s Bre Banca Lannutti CUNEO downed pretty easily 3:0 the hosts of ACH Volley LJUBLJANA in the first round of action for the Playoffs 12 of the 2013 CEV Volleyball Champions League. Read latest volleyball news on Worldofvolley.com. 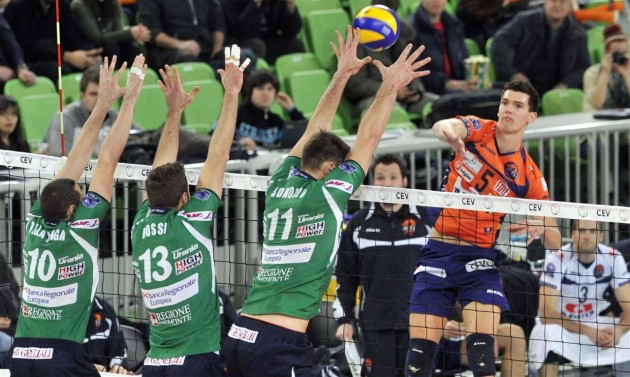 In the first set the guests quickly managed to move up by two points by exploiting the good serves by Andrea Rossi and could keep that small cushion up to the first technical time-out. ACH Volley’s players struggled even more as Bulgaria’s opposite Tsvetan Sokolov went to the serving line, so CUNEO could stretch their lead up to four points, and this forced home coach Luka Slabe to call a time-out as his guys were trailing 6:10. Afterwards the home team could bounce back and drew the count at 15 all before CUNEO moved to the front again and Slabe asked for another stop of the game. A block by Borislav Petrovic restored equality and Brazilian Carlos Henrique Moreno even helped ACH Volley flip the charts around before the hosts made several errors down the final stretch to pave the way with gold for their opponents.

The score remained close up to 4 all in the second set before ACH Volley went briefly to the front. CUNEO had already turned the charts around by the first technical time-out (8:7) and their lead was gradually widened via some excellent blocks and also by exploiting the errors of the home guys. Any attempt for a comeback by ACH Volley was stopped by the mighty serves of Sokolov and the Italians could go for a provisional 2:0 lead in sets.

ACH Volley’s coach Slabe changed his starting six for the third set, bringing Gregor Ropret and Jan Klobučar into the game. Unfortunately this could not prevent CUNEO from taking the lead by seven points. When Mory Sidibe started playing for the home team, ACH Volley managed first to catch up with its opponent and then even tied the score at 13 all. The result at the second technical time-out was 16:15 for ACH Volley and it looked like the home team could be able to win the third set. However, the Italians scored six consecutive points and a successful attack by Wout Wijsmans sealed the fate of the match.
Best player of the game was Tsvetan Sokolov with 21 points, while ACH Volley’s top scorers were Alen Šket and Mory Sidibe with 8 points apiece.

After the match ACH Volley’s coach Luka Slabe said some details had decided the game and that his team did not perform as it had done in the past weeks. Its performance must improve for the next match in Italy. Captain Andrej Flajs confirmed his statement: “Our goal was to give our best tonight and we did not quite succeed. Next week we should be more focused in the counter-attack”.

CEV CL M: Stoytchev – “Dinamo was so efficient, we were not prepared “