With another win in straight sets (25-22, 25-18, and 25-16) Italy’s Copra Elior PIACENZA claimed the 2013 CEV Volleyball Challenge Cup – Men thereby completing a memorable run that included twelve straight victories in as many matches since the start of the season. Read more about latest volleyball news, games reports, and statistics on WorldofVolley. 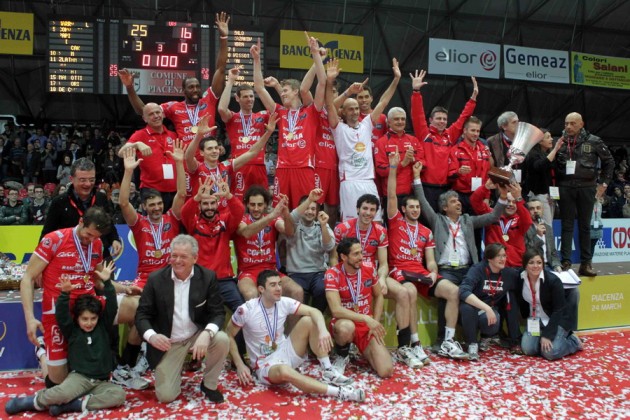 “I am happy because we could bring it home though we evidently felt the pressure resulting from this home final” Copra Elior mentor Luca Monti stresses. “We shall give the credit for this success to all of our players because they did not make anything wrong in twelve matches”.

“I would like to dedicate this trophy to my friend Vigor (Bovolenta). He deserves it because he stood at our side all the way up to this victory. We have written history this season by claiming 12 wins in a row without conceding any single set to our opponents” so team captain Hristo Zlatanov.

“We do have some regrets for these final matches but we played bad in Russia as well as tonight while PIACENZA did show excellent Volleyball on both occasions. The absence of our first setter did evidently sideline us but it shouldn’t be an excuse for our poor performance. We had lots of problems in reception and played bad also in attack; our serve was not that effective and our block almost not existing” concluded Ural UFA mentor Angiolino Frigoni.

To read more news from this competition click on CEV Challenge Cup – Men.

Michal Debiec – “We have to take full risk”