Italy: 200 times thank you to Bruno

Marmi Lanza Verona: Bruno Bagnoli celebrated his 200th appearance as Verona coach yesterday. The coach received a standing ovation as the players made it a perfect day with a 3-1 victory over Ravenna. 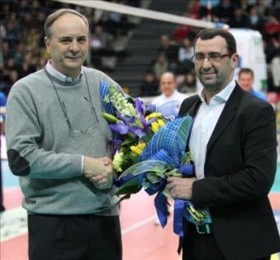 200 times thank you to Bruno

“My first experience in Verona was extremely positive because we earned promotion in our first attempt, that was a great way to start – remembers coach Bagnoli – The second step was even better, I couldn’t believe the strong team I had in the A2 and indeed we won the league and the cup. And the journey continued in the A1, we only added one player, went unluckily out of the Cup Final Four and pushed Treviso to the playoffs fifth game”.