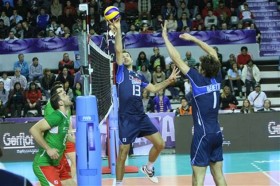 Italy too good for Bulgaria

Having topped their group in the Intercontinental Round, Italy continued in a similar vein in the first set. Immediately they were up 3-0 and 5-1. That was enough of a lead for eight-time champions Italy to win the first set.

Much to everyone’s surprise was how Bulgaria quickly turned things around in the second set. Four successive blocks from Sokolov and Svetoslav Gotsev gave Bulgaria the lead they craved at 23-15 before Skirmov spiked home to tie the match up.

The battle between the two top scorers in the World League was impressive with Sokolov giving Bulgaria a 16-12 in the third set lead before Zaytsev hauled Italy back to tie at 20-20. A parade block and another Zaytsev spike and a block gave Italy set point at 24-21 before Solokov couldn’t control his serving radar.

The fourth set featured a similar pattern to the third set with Bulgaria and the outstanding Sokolov leading 18-16 only for Italy and Zaytsev to fight their way back. At 20-20 there were back-to-back challenges with each team successfully having calls overturned before a tip from Cristian Savani dropped into space with Bulgarians all looking at each other. That seemed to seal Bulgaria’s fate.

Zaytsev led Italy’s scoring with 19 points but Sokolov was a man on a mission, recording 27 which represented close to 30 percent of Bulgaria’s points.

To see more photos from this match, see the gallery below.