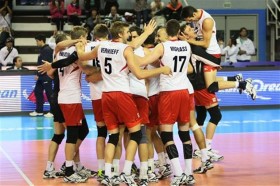 Brave Canadians celebrate their fist win at WL Finals ever

Canada made the first challenge at a World League Finals when they challenged a net touch but it was unsuccessful as they trailed 6-2. Russia soon lead 16-10 before Canada coach Glenn Hoag called on the tallest player in his squad Gavin Schmitt at 2.08m to replace the unusually inconsistent Soonias. The North Americans soon pulled their way back to 19-17 but Russia struck back – 25-20.

Despite the first set set-back, Canada continued their momentum in the second leading 5-2. Russia pulled back to 9-9 and gained the lead at 19-18. Spiridonov and Sivozhelez had successful spikes giving Russia the second set 25-21.

In the third set Schmitt, Perrin and Winters gave as good as they got and soon the underdogs held a 22-20 lead and later sealed Canada’s first ever set win against Russia in the modern scoring era. The underdogs soon snatched a second set-win.

Even with the match tied at two sets apiece, the feeling within the Estadio Islas Mavinas was that Russia would finally pull rank and complete the victory and at 7-3 up, it certainly seemed to be the case however, Canada – who had a best finish of seventh (1992) in the World League – weren’t to be overawed. They slowly pulled it back to 7-7 had a match point 14-10 before Joshua Howatson blocked the final point for the historic celebrations to begin.

Most efficient in the team of Canada was John Gordon Perrin with 20 points scored, while the best “Zbornaya” member was Dmitriy Muserskiy with 19.

For more photos from this match, check out the gallery below.