Despite a 3-1 defeat against Russia in the 2013 World League semifinals, Italy coach Mauro Berruto was still very positive about his team's performance. 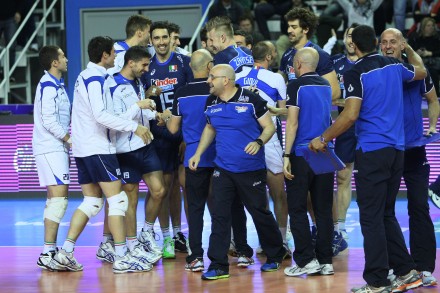 “It was a disappointing first set, Russia was better than us in every skill, but of course they had more energy than us in that moment. We played a tough match 18 hours ago, Russia was playing its last match two days ago, so probably in the beginning
the balance of energy was different.” – said Mauro Berruto.

“Then in the second set, this is a match I have to be extremely proud about what we did. We were able to return in the match. We were suffering the whole match but still staying on the court and trying to react.”

“It was not enough, they [Russia] deserved to win, because they played better volleyball, but I wouldn’t change one centimeter of the muscles of the Russian players with the heart of my players.”

“The second set, we had a couple of quite easy situations where we were able to score a couple of points more and we lost 25-23 and that was the key of the match.”
Italy saved Russian match points to take the third set 26-24 and give them a chance to get back into the match.

“It was a great comeback, and it’s not the first time it’s happened with them, it’s happened in many other matches – this team has never died. These are things that you don’t teach you have players that have this ability or not, so I am happy to have this kind of player and I am proud of them.”

“We have to focus for tomorrow because still a medal is there waiting for somebody and we want it. We are also working for the future but I think whatever happens tomorrow we will be back in Italy with a great experience.”

To read more news from this competition click on World League 2013.

See more information about this coach on his WoV Community profile Mauro Berruto.

WL: Russia beat Italy in 4 sets for the finals (PHOTO)

ITA W: Scandicci has made it official...