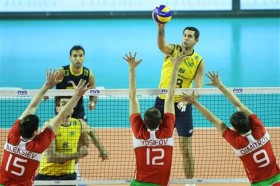 Brazil, who had beaten Canada on Friday to qualify for the semifinals, was definitely on a mission. With middle blocker Isac starting for the first time in the Finals, they charged to a 10-7 lead and after Lucarelli blocked Bulgarian powerhouse Tsvetan Sokolov before advancing to 22-11. The first set was over.

The second set was a similar picture with the nine-time World League champions keeping Bulgaria scoreless while registering four themselves. Wallace helped extended the lead out to 14-9. Despite a challenge from Bulgaria, Brazil had the second set 25-17.

In the third set Bulgaria led 8-4 and 9-5 when Georgi Bratoev blocked Lucarelli. The lead went out to 11-5 before Brazil fought their way back to 18-16 down. However, Bulgaria did enough to keep their noses ahead.

The fourth set started more even than any of the previous three as, with the score at 8-7. Bruno serving rushed Brazilians out to a 12-7 lead thanks to Wallace who was on fire. Brazil soon had a lead 16-9 that decided the match.

Best scorers in Brazil were Wallace with 24 points, while Lucarelli scored 15. In Bulgaria, the best among others was Todor Aleksiev with 15 points, only one with double digits. Sokolov, the best scorer of Intercontinental round noted only 6 points.

See profiles of Wallace and Aleksiev, and also of national teams of Brazil and Bulgaria.

For other news from this competition, click on World League 2013.