WL: Russia beat Italy in 4 sets for the finals (PHOTO) 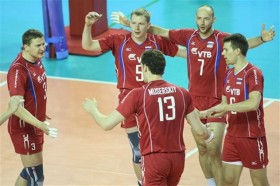 Russia goes into the finals, respectively

It was the Olympic champions who really took the match by the scruff of the neck in the opening set, opened it with a 12-7 lead. Nikolay Apalikov then gave the world No. 2 a 15-7 lead with some incredible power serving, which included an ace. The final set score of 25-12 was the lowest ever between the two countries.

After the disappointing first set, there was only one way to go for Italy and that was up. Like Friday’s win over Argentina, libero Andrea Giovi was replaced by Salvatore Rossini to improve the passing and that immediately worked. An 8-6 lead soon opened to 12-7 before Russia started to put on the squeeze. Like an expert sprinter timing their run perfectly, Russia gained the lead at 23-22 before Nikolay Pavlov sealed the set at 25-23 with his 10th point of the match.

Pavlov’s block on Ivan Zaytsev at 18-13 effectively sealed the match in the third set. It certainly seemed that way when Russia had match point at 24-23 but two inspired spikes from Zaytsev and Pavlov’s, inexplicable spike into the net gave Italy a relief.

Italy’s desperation in the fourth set was apparent when they unsuccessfully challenged a serving foot fault on Alexey Spiridonov at 11-6. This spurred Mauro Berruto to take a timeout which worked wonders as Italy fought back to 18-16. Despite that late drama, Russia soon wrapped up the match with Ilya Zhilin sealing the set and the match 25-20.

Best scorers in “Zbornaya” were Pavlov with 21, followed by Spiridonov with 14 points. In Italy, Zaytsev scored 17 and Simone Parodi 12 points.

See the photo gallery from this match below.

Also check out profiles of Pavlov and Zaytsev and national teams of Russia and Italy.