Trentino joins Macerata in the Cup final thanks to a straight set victory over Belluno. Stoytchev’s team showed off their skills with 56% in attack, 9 aces and 3 blocks. 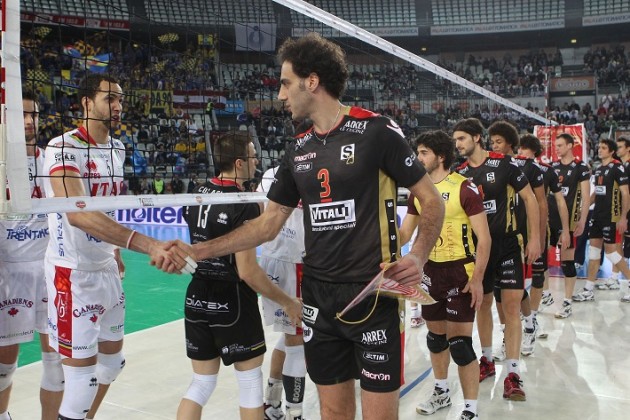 Matey Kaziyski (Itas Diatec Trentino): “We played a good game, like we should in a cup semi-final. We proved we were here to win. We’ll have to play with fighting spirit tomorrow and play as a team, trying to do our best in every area at all time because Macerata is a very strong team and they proved it today”.

Osmany Juantorena (Itas Diatec Trentino): “The serve has been the key to our victory. Our team tends to serve well and when we manage to make it difficult for the opposite receiver, it becomes hard to play against us”.

Raphael (Itas Diatec Trentino): “Today’s victory is the result of the work we constantly do in the gym. We have a versatile and very strong roster, our main strength has always been the team effort and that’s why we can dare trying the most difficult situations. In the final, there will be two teams serving hard, this will be the key in my opinion. Macerata is one of the strongest teams in the world right now. That will make it a top quality game to enjoy for the fans”.

Roberto Piazza (Sisley Belluno): “It’s a shame, I am disappointed because at times we have played at a good rhythm, but a couple of plays meant they had the advantage. They served better than us, especially at the start of the second set, they played better. And when they start finding their rhythm and gaining confidence, they are unstoppable. I’ve said it many times, this team is built to win. Still, I am never satisfied and today we could have done more. I would like to thank the fans that came numerous to Rome”.

Alessandro Fei (Sisley Belluno): “Trento is a great team, probably still too strong for us, they rarely make mistakes, they hit the ball hard. We tried to stay close, then with a few superb plays they manage to go ahead. Trentino always impresses me, they have a huge potential. And Macerata is playing very well, I can’t see a favourite for the final”.

ITA: Warming up – Tuesday vs Unterhaching