Macerata qualified for the Italian Cup final thanks to a 3-1 win over Modena. Its last final was in 2009 in Forlì. It had begun with a huge scare though, as captain Ormcen had to receive medical treatment on his ankle during the warm-up. 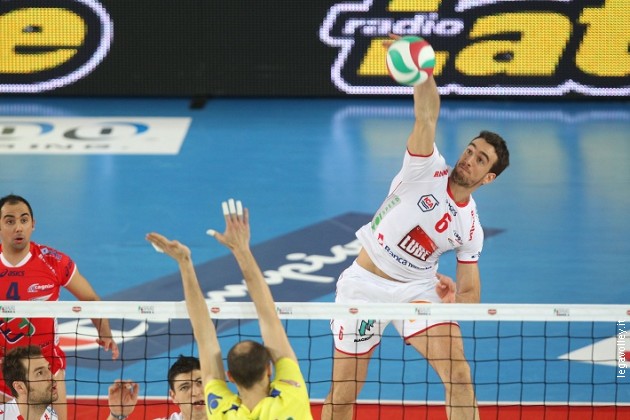 Cristian Savani (Lube Banca Marche Macerata): “It has been a tough period for us, our game was not as good as at the beginning of the league. But we showed in the Champions League against Cuneo and in this cup game that we manage to play well and go through in knock out games. We’ll see who will be our next opponent, I do have a good idea of who it’s going to be but Belluno is capable of making an upset. This will be a tough final anyway, like every knock-out game in these kind of occasion”.

Simone Parodi (Lube Banca Marche Macerata): “If we play with character like that we can beat anyone”.

Jean-Francois Exiga (Lube Banca Marche Macerata): “Both teams were a bit tense at the beginning, which is normal in a cup semi-final. The important thing was to win. I think the serve has been key, this is one of our main strengths”.

Dragan Travica (Lube Banca Marche Macerata): “We have been aggressive in the first two sets, on the serve and at the net, we have been effective in both fundamentals. Then Modena started to serve better and the rest is pure statistic, when you win well the first two sets, you tend to slow down in the third”.

Marco Piscopo (Casa Modena): “Our approach to the game was not good, we played very tense. Credit as well to Macerata which inflicted us some good run of serves at various moments of the game. We started to play in the third sets, while in the fourth we could definitely have done better. We started to believe in our chances but we made many mistakes on counter attacks. And Giuliani’s time-out at 18-15 annoyed me”.

Angel Dennis (Casa Modena): “We prepared the game well, especially for the serve, and we wanted to play a good game. But it didn’t go as we wanted. On Sunday we’re up against Macerata again, but in the league, this will be a totally different game. We have to focus on what we have left now, the league”.

Slow motion in the Final Four

The slow motion, which had been experimented in November’s All Star Volley, was officially introduced in the cup, which will allow perfect replays helping to see the touch of the balls at the net.

ITA A1: All points for San Giustino...