Twenty-two year old Filippo Lanza is one of the young players that Italy’s standout Diatec TRENTINO has chosen in an attempt to continue a unique success story after their major stars – Matey Kaziyski, Osmany Juantorena, and Raphael Vieira de Oliveira to name only a few – moved to Turkey last summer. And the start of the 2013/2014 season looks very promising after TRENTINO won the Super Cup and claimed three consecutive victories in the prelims of the 2014 CEV DenizBank Volleyball Champions League – Men. 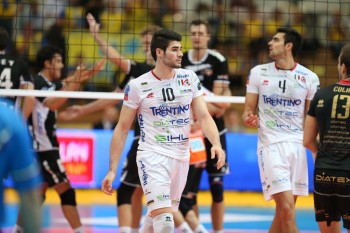 Born in the neighbourhood of Verona, the city of Romeo and Juliet, Filippo started playing Volleyball quite late, only by the time he was already 14. “I played rugby first and I really liked it; it was a good way to let myself go after coming back from school. I started playing Volleyball because of my father and actually my first team was the one he was coaching. Some representatives of TRENTINO Volley scouted me as I was playing in a tournament with the team from my home region and since those early days I did not stop progressing. I decided to quit rugby and to focus exclusively on Volleyball for I somehow realized that this was an opportunity I could not miss.”

Though some people were questioning the value and strength of the team before the start of the season, TRENTINO got off to a flying start in the prelims of Europe’s elite competition sweeping three matches in a row, including two home victories over Germany’s champions BERLIN Recycling Volleys and Swiss rookies Energy Investments LUGANO before last week they routed Arkas IZMIR in straight sets. “Our goal is to make the Playoffs 12 and we hope to finish first in our Pool so that we can get a good draw for the next round” Lanza says. “The matches we played so far testified that our team is competitive not only in Italy but also on the international stage. As we draw the line after three rounds, we can be happy with what we have achieved but we shall keep focused also for the matches ahead.”

The young wing-spiker has registered 33 points so far in Europe’s elite club competition to support his side and make sure they could get off to a flying start of their campaign. “I am happy with the way things have gone so far but I do not care that much about these figures. The key point is that I am helping the team and supporting the efforts of the group. My main concern is the final result of the game and I am trying to contribute to a positive outcome with a solid performance in reception, defence and from the serving line as well. Of course, I am very happy if my stats are good in attack as well but I am not that interested in registering as many points as possible. My priority is that, at the end of the day, we win.”

Diatec TRENTINO underwent a major “revolution” last summer with the departure of former head coach Radostin Stoytchev and a good share of their starting six. “However, there are many things that haven’t changed at all” Lanza stresses. “Our determination to win, the excellent organization and management of the club as well as the way we prepare for all of our matches have stayed the same. Of course many things have changed starting with the roster, the individual skills and our age. The group is much younger than it used to be. I am nevertheless convinced that if we keep up the good work, we will gradually be able to compensate for the gap that we evidently had from the previous generation.”

Filippo has a very special connection to the city of Trento and to the club as he started playing there at a very tender age, well long before he turned into a professional and fully committed Volleyball player who is about to represent Italy at the upcoming World Grand Champions Cup in Japan. “TRENTINO Volley is really like a second family for me, especially because I was very young when I first came here and have been playing for their teams in the youth and junior divisions. I have very close ties with all the people working here and with all those I meet every time I go to the sports hall. I owe a lot to this club and I am very grateful that they have showed that much trust in me as we embarked on the start of this new era.”