After almost one month Italy’s Diatec TRENTINO will be back in action in the prelims of the 2014 CEV DenizBank Volleyball Champions League – Men. The three-time champions top the charts in Pool D with nine points after three rounds and on Wednesday will go for a remake of their match with Arkas IZMIR. 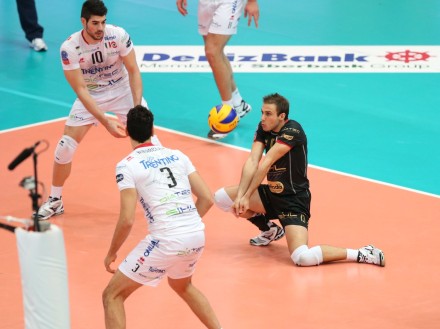 The side from Turkey is currently at the bottom of the tables with only one point and will try to bounce back after losing to TRENTINO in straight sets in early November.

TRENTINO will go for a home victory in order to cement their leadership in the Pool and to resist to a possible comeback by their closest rivals, Germany’s BERLIN Recycling Volleys. After beating Arkas IZMIR, TRENTINO lost to their arch-rivals Lube Banca Marche MACERATA in the national league but got back on track with another two victories since then.

TRENTINO mentor Roberto Serniotti will be able to count on all of his players including team captain Emanuele Birarelli and wing-spiker Filippo Lanza who won bronze with Italy’s national team at the World Grand Champions Cup in Japan and were retained there for the All-Star Team.

“One month ago we played an excellent game in Turkey but this straight victory shall not make us underestimate our opponent” Serniotti says. “It is not going to be easy at all especially since Arkas has improved a lot in the meantime under the guidance of their excellent coach Glenn Hoag. I respect him a lot and I think he is one of the best Volleyball coaches around at the moment. We have to be well prepared and very determined in order to win this game and keep our leadership in the group.“

INTERVIEW: Ivan Miljković – I do not believe in luck