In the derby between Bagnoli brothers, Daniel the coach of Modena and Bruno the coach of Verona, better was the team of Daniel that took the victory. 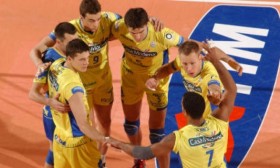 On the other side, the top scorer was the captain of Modena, Dennis Angel (22 points with 4 blocks), while Martin finished with 73% in attack.

Mark Piscopo was elected MVP of the match: 75% in attack, 3 aces and 3 blocks.

In the first set Modena took the lead from the start thanks to Dennis, while Marmi Lanza did not give up.

However, Casa Modena closed the set with 25:22.

In the second set Marmi Lanza was leding with 3:0. The game was tense until the end of the set when Casa Modena won with 33:31.

The third there was balanced. Piscopo and Martin of Modena, were good in attack, while Popp of Verona was excellent in defense. The set finished in favor of Verona with 22:25.

In the fourth set Modena immediately imposed its tempo closing smoothly thanks to Martin 25:17.

Daniele Bagnoli (Casa Modena coach): “The  match was very balanced. We have fought very effectively.  We needed these 3 points too and needed to take the moral victory. On the other hand we made too many mistakes. Now we are at the crucial stage of the season and we will train to play better.”

Bruno Bagnoli (coach Marmi Lanza Verona): “The difference was in service, otherwise I think we played well. Salvation? Yes I am worried and even more angry about that second set. “