Trento and Modena face this game in a gloom period of their season. Trento was knocked out of the champions League and lost two league games running. They are without Sokolov and Szabò, while Birarelli and Suxho are not hundred percent fit. As for Modena, they’re on a five-game losing streak and had gone out of the Italian cup in the quarters (against Trento). Besides, Guillaume Quesque is on his way to Russia. However, a rumor not made official yet says French spiker Earvin Ngapeth (former Cuneo player) would leave the Russian side of Kemerovo to come to Modena. 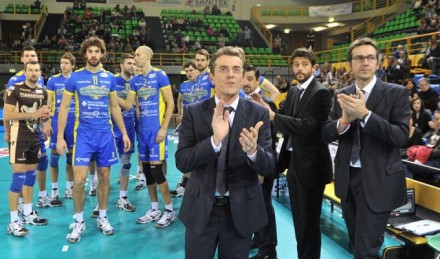 Matteo Burgsthaler (Diatec Trentino): “We haven’t received much positive from recent games, we had some players missing too. But we know that if we can limit our mistakes and play as a team, like in the second part of Thursday’s game against Belgorod, we can make it, we can make it hard even for a tough opponent like Modena. It’s a difficult period for us but we have to look to the future with confidence”.

Angelo Lorenzetti (coach Casa Modena): “We don’t have many games left until the end of the regular season and things have gotten complicated for us. That’s why we have to try to snatch as many points as possible wherever we play. We’ve had ten difficult days, we have lost our way after a period in which we improved our game but did not get any points. We have to start over, motivate ourselves and try to play at the level we were capable of just about ten days ago. Trento can play excellent volleyball, and they can play fast. They’ll have a new line-up, we’ll need to do a good job of reading it”.

Out of the champions League, Piacenza will focus on the league and the Italian Cup. Cuneo, which had a poor first half of season (out of the Cev Cup and knocked out of the cup in the quarters), seems to have found its rhythm. They gathered four consecutive wins and 11 points that rocketed them up to fifth in the table.

ITA M: Grebennikov got used to his...