The first round of the playoffs semi-finals went to Trentino and Cuneo at the expense of Latina and Macerata and now both teams will have their first chance to qualify for the V-Day this Sunday April 15. 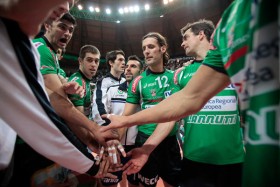 Carmelo Gitto (Andreoli Latina): “We are obviously sorry not to play in our home arena but we will give our best because this is an important opportunity to re-open the series and try to have our say in the matter as we deserve to do”.

Osmany Juantorena (Itas Diatec Trentino): “The series was definitely not over with Game 1. We’ll be facing an even tougher game in Frosinone and we’ll surely be facing a heated atmosphere. We’ll have to do a good job in the difficult moments and not panic when Latina will be ahead”.

Francesco Pieri (Bre Banca Lannutti Cuneo): “Macerata will be ready to fight like never before this Sunday, this will be their last chance. We remember what happened in the Champions League, so it will be important to have the right attitude coming into this game, knowing we still have work to do to qualify. We’re confident it’s true, but it’s also true we’ll need another excellent performance like Thursday’s to get into the final”.

Igor Omrcen (Lube Banca Marche Macerata) “We have no choice but win it, this must be our motivation despite the fact there is a lot of pressure due precisely to being in this point of no-return. Macerata did not play at its usual standard on Thursday, we all know it, but now we’ll have to prove it on court by playing at a different level compared to Thursday. But we’ve not given up just yet”.