Zdar nad Sazavou, Czech Republic, April 13, 2012. Spain edged France at the tie-break on Friday in Zdar nad Sazavou to claim what was supposed to be the real highlight of this European qualifier to the 2012 CEV Junior Volleyball European Championship – Men. The silver medalists from last year’s Youth World Championship got the upper hand there and with this result look in a favorable position to pocket the only pass available to advance directly to the final round of the European Championship, especially after the home guys of the Czech Republic were stopped earlier in the afternoon by a very solid Slovenian side. 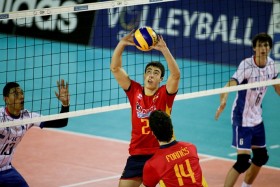 Romania and Estonia opened the program of day three in Zdar nad Sazavou searching for their first victory in the tournament. As the home guys of the Czech Republic had done on Wednesday, Estonia pressured a lot the Romanian defense and hence influenced the quality of their attacks, pocketing the opening set with the score of 25-19. The second set was more balanced and there Romania reduced to a minimum their mistakes to go for the 1:1 (28-26). Estonia restored its clear leadership in set 3 with great figures in attack (25-22) while the fourth set followed a similar plot but with a different end, as Romania called for the tie-break (25-23). Romania eventually celebrated its first win in the competition by taking the deciding set with the score of 15-13 and 2 points for the charts.
“It was not easy as my players are very young and they make many mistakes, but we kept our promise to score a win in this tournament” said Romanian head coach Valentin Grigorie.
“We always set the pace of the game in the first half of all sets but we made a way too many errors in the last sections and could not win in the end” singled out Estonia’s mentor Urmas Tali.

The home guys of the Czech Republic ended their winning course on Friday as they lost to Slovenia 1:3 (18-25, 15-25, 25-17, 22-25). The guests caught an excellent start and went up 6:1 in the opening set and without slowing down their pace could go for a speedy 25-18. Slovenia’s setter Jan Brulec anchored his side with great confidence in set 2 and the audience in Zdar nad Sazavou got totally silent as the guests from Slovenia sealed a terrific 25-15 on the scoreboard to go for the provisional 2:0.
The Czechs found their way back into the game in set 3 where setter Pavel Bartos was finally able to use his middle blockers and the home heroes quickly sailed away to finish it with the score of 25-17. Slovenia got control of the operations once again after the second mandatory stop of set 4 and even though the Czechs drew level at 21 all, still the Slovenians went up by 2; Michal Finger raised some hopes for the home side but the guests finished it off with the score of 25-22.
“We could not control their service, at least for the first two sets, and this inevitably influenced the quality of our offense” stated Czech coach Petr Juda after the game.
After losing twice at the tie-break in the past days Slovenia’s head coach Samo Miklavc was more than happy with this result: “I would like to congratulate my players as they fully respected the tactics we had agreed upon while preparing this match. We can finally celebrate our first win after losing two tie-breaks in the previous matches”.

The daily program was rounded out by the top match starring the 2011 youth European silver medalists of France and the runner-ups of the FIVB Youth World Championship from Spain. This was supposed to be a sort of pre-final and Spain eventually asserted its intention to claim the pass for the final round of the European Championship by scoring a 3:2 win (25-23, 25-27, 18-25, 25-16, and 15-13). The game was a real delight for all Volleyball fans with many great rallies; Spain did display great attacks in the first set while France decided the second in its favor with a very close final rush. The next two were fairly divided by the two sides and the tie-break was decided by a yellow card given to a French player who protested against a decision of the first referee, thereby sealing the final 15-13 for the Spaniards

WCHJ W: Algeria come from behind to...