Bardejov, Slovakia, April 13, 2012. Bulgaria, Switzerland and Austria all collected three points in the third round of action for the European qualifier that is being held in Bardejov. Bulgaria beat the home heroines of Slovakia 3:1, while Switzerland edged Azerbaijan with the same score and Austria surprised almost everyone with a straight set victory against the Netherlands. Slovakia still leads the standings but everything is possible in this group with two more competition days left before the end of the tournament. 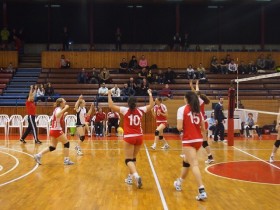 In the first match of the day Switzerland played against Azerbaijan that had a negative record of two losses so far in the competition going into this match. The Swiss players started the game more concentrated and went up 20:10. They played more variable in attack, while Azerbaijan used mostly Ulkar Mammadova with Switzerland being well prepared to contrast her at the net. The Swiss girls easily won the first set 25-14. The second set followed the same plot. Azerbaijan changed its playing system, but Switzerland was better and went rapidly for the final 25-19. The Swiss coach changed some players from starting line-up in set 3 and Azerbaijan exploited this opportunity to take that section of the game with the score of 25-20 and to lead 18:15 in the fourth set. However, Switzerland didn’t want to play a fifth set, sealed it at 25-21 and could take three points from this game. Elena Steinemann collected 20 points for Switzerland and the same did Aliaksandra Prupas for Azerbaijan. “I think in the first two sets we made exactly what we have to do. Our players took the right energy from their last game. Afterwards we made some changes and our players lost concentration a little bit. Volleyball is very fast, the situation can change very quickly but I am happy that we turned the score around in the fourth set and we won the game” said the head coach of team Switzerland Florian Steingruber.

In the second match of the day the home heroines of Slovakia lost to Bulgaria 1:3. Bulgaria started out the game better, served very well and displayed a strong defense at the net. They went up 19:14 in the first set, but then Slovakian middle-blocker Nikola Stumpelova made a nice run with her service, Slovakia leveled the score and eventually claimed the first set 25-20. Bulgaria started better the second set, while the Slovakian girls pushed by a great audience looked nervous and produced a lot of errors. Slovakia again cut the lead and leveled at 19 all, but this time Bulgaria wrapped it up at 25-21. Bulgaria played better than the local girls also in the next two sets and deservedly won the game 3:1. “We knew that it was going to be a hard game because Bulgaria is strong. We won the first set, but we had to cope with a bad reception in the next sets and we produced many mistakes. The situation in our group is interesting” said the head coach of Slovakia Eva Kosekova. “I think it was very a good match and the quality was very high. We lost the first game in this tournament, but after that we won two and we are back in the business. I changed setter after the first set because our first was a little bit nervous and it helped us. I am very glad that my outside hitters were able to bring many points” added the head coach of team Bulgaria, Radoslav Bakardzhiev.

In the last game of the day Austria surprisingly beat the Netherlands in straight sets. The Austrian girls dominated from the start to the end. They looked more motivated and enjoyed the game while Holland could not get back the same quality displayed in the opening match of the group. The “Oranjes” played very bad in reception and therefore their attack was not effective. Austria won 25-16, 25-19, and 25-21 to take 3 points from this game. “After yesterday’s defeat we decided not to have training in the morning, we walked around in this nice city and we cleared our minds a little bit. In the afternoon we had our intensive preparations for the game with the Netherlands. We produced a minimum of mistakes tonight and I think it was the key for the victory. We will play against two good teams, Switzerland and Slovakia, in the last two days but we will do our best to take some more points” singled out the head coach of team Austria Li Qing.