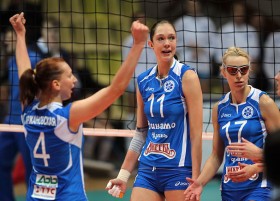 – Do you know how the account became for you in this gold? – A question of one of the best volleyball players of the planet, twice world champion, now eight-time champion of Russia, the captain of Dinamo Kazan, which in Friday’s match (3-2) earned to the club of 37 points!
– No, I do not consider the titles. For me, winning is important in principle. Every match, every tournament, ever.
– Today was Friday of 13th…you are not superstitious?
– Generally is not present. But once we won, so this was a happy day for Kazan.
– You scored 37 points, and your counterpart Natalia Goncharova 39…
– So what? All finals have been compared with Natasha for some reason. But volleyball is not played by individuals and teams. Today we are more fortunate, nothing good happens. Or are you convinced?
– What to prefer before gathering to the national team?
– And holiday will not be. I will fly to Kazan, take away of my things and to the national team.
– At the club level, you have not yet managed to win only one tournament – the Champions League. The following season, Dinamo Kazan, this problem will be on the shoulder?
– If I’m staying in the team, I think that we can win in all competitions. Including in the Champions League. What questions here can be? In general, for two years, held in Kazan, the time to get used to this city. I was called in Turkey, and back to Moscow, but I have decided to not search for goods from goods.
– The completed final once again exposed the obvious problem of the Russian team on the eve of the Olympics – an unstable game in setter. Who, in your opinion, should pass in the starting six at the upcoming Olympic qualification in Ankara and then in London?
– Of course, I have an opinion on this subject. But, you know, let’s just believe in our team! We have three months left to London. We will select the place, you’ll see. And whoever took the place of the main setter at the Olympics, all at us there should be good!

Mitja Gasparini : Our game is constantly...

Polina Rahimova for WoV – “This tournament...