The captain of Foppapedretti Bergamo, the Serbian receiver Jelena Blagojević will stay in the club of another season. 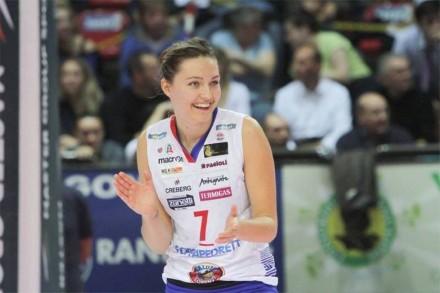 After a great year, the club has decided to extend the contract with the captain who played at a high level all season.

“I can say that we had a great season if we look at our team who is very young. We made a huge success when we took participation in the Final of the Italian Cup and at the end of the regular season we were the third on the table. The only bad thing is that we finished the season with two losses of 3-0. I am really happy in Bergamo, we have a good coach, people from the club are great as well as the team, and it was one of the main reasons why I decided to extend the cooperation.” said Blagojević for WorldofVolley and adds:

“I know that Diouf and Merlo will stay in the club but I still don’t know who will be in the team next season. The club has such a policy that every year they are making a young team with a few experienced players. Regardless of that fact, I believe that we will have a nice season” said Jelena who will teach children about volleyball at Camp Bergamo in July.