Segrate continues to set the pace atop the A2 Italian Volleyball league. 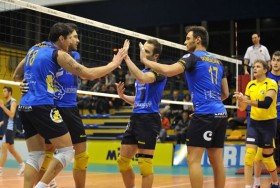 Segrate won the live TV derby game against Milan and took all three points. Segrate also extended its lead at the top of  Italian Volleyball league as Castellana Grotte was forced to a tie-break in Perugia. Molfetta remains third by beating Reggio Emilia which loses one position in the table (14th to 15th) because of Cantù’s first victory of the season, 3-1 over Atripalda, which is bottom.

Sora moves up to 4th with a 3-1 win over Santa Croce, which slips down three places because of the three-point wins from Loreto, Città di Castello and Genova respectively over Corigliano, Club Italia and Isernia.

ITA M: Opposite from Perugia moved to...