ITA M: Giuliani – “Playing as a middle blocker for Fei is like riding a bike”

After an away 3-0 win against Ravenna, the head coach of Lube Alberto Giulian said that his team is growing: 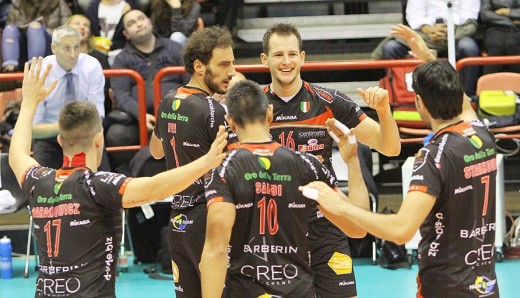 “This game against against Ravenna told us something very important. Lube is growing as a personality. I hope this is not an episode. I want to see progress in the next game in Istanbul. I would like to see growth from this point of view. Fei as a middle blocker? For him, it’s like riding a bike. Next step for us is Champions league, which comes after the good performances. We know that teams from abroad always give their best against Italian teams” said Giuliani.

Alessandro Fei commented on his new role in the game against Ravenna:

“The coach decided to give me a role of a middle blocker in this game. It was fine. You saw that I still remember to play this role. We had a great performance and now we have a game in the CEV Champions league ahead of us” said Fei.

Players of Padova – “Volleyball is not a crime. Free Ghoncheh”