Pool A and Pool G are among the most interesting in group phase of the Champions League and according to results in the fifth round, the last one will determine which teams will enter into playoff. 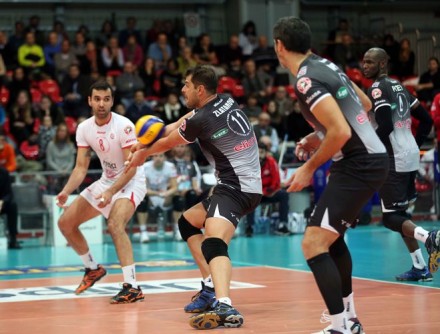 Copra Piacenza was better versus Knack Roeselare at home court in four sets and its equal with CVM Tomis Constanța at the top of the standings with 10 points each. Although, the Romanian team did not play its fifth round match yet.

Piacenza had Raydel Poey with 20 and Hristo Zlatanov with 15 points as the most efficient players.

Roeselare was led by Tomas Rousseaux (19) and Hendrik Tuerlinckx (11).

In Pool G, Halkbank Ankara surprisingly had a lot of trouble with Noliko Maaseik and overpowered the opponent only after trailing 1-0 and 2-0 in sets and after tie-break.

Halbank has the some amount of points on its account like Sir Safety Perugia (11), but the Italian team has one match less.

Osmany Juantorena’s 27 and Tsvetan Sokolov’s 23 points were enough at the end fot the Turkish representative.