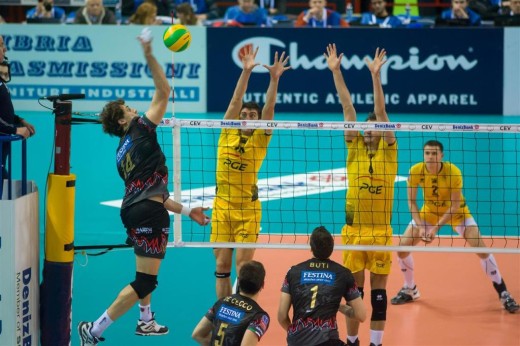 All eyes were on Aleksandar Atanasijević. He faced his former team and a former teammate Mariusz Wlazly. It was emotional evening for him and he had his show! The Serbian bomber scored 32 and thanks to him, Perugia won the match!

From the start of the game, Skra faced with very good serves of the home team. They were struggling in defense and in attack as well, so Perugia made huge lead at the first TTO 8-3 and later at the second TTO 16-8.

Polish side tried to make comeback and they were close (21-17) but Grbić’s side was strong enough to keep the lead until the end 25-17.

At the very beginning of the second set Perugia had 4-1 lead after some good actions and ace of Atanasijević. After the first TTO (8-4), away side started playing with a full throttle and managed to turnaround the score! At the result 21-18, Vujević got blocked by Uriarte, a moment later Wlazly scored an ace and Perugia had to surrender, 25-20.

In the third set, both teams very tied until the very end. At the result 22-21 for home side, Atanasijević’s serve brought Perugia 23-21 lead. The Serbian player has perfectly reacted later and used the first set point for the lead again 25-23!

Andrzej Wrona was the man who helped Skra to tie the score in sets. At the result 22-21 for home team, Wrona scored two aces using float serve! The scoring run continued after Atanasijević’s mistake 22-24. Skra missed the first set point but used the second and tied the score in sets!

The tiebreak went well for home team! It was a great battle but home team managed somehow to beat Skra! Fromm was the man who scored an ace for the win and Perugia’s fans started celebrating!

Christian Fromm contriubuted with 24, while on the other side Wlazly ended match with 23. Conte had 16 points!