WC M: Some new and powerful Italy – Zaytsev and Juantorena for win against Canada 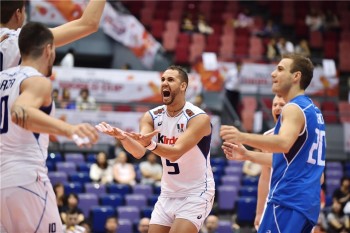 The era of Gianlorenzo Blengini started on the best possible way for Italy and the main impression after the first game of this new team is – Azzurri will be one of the top favorites in Japan! Italy defeated Canada on the opening day of the World Cup 2015, but more importantly for them – the team played really good.

Especially in the first set where Ivan Zaytsev showed how much he is enjoying playing as opposite. With some crazy strong spikes he started the engines of his team and motivated his teammates to follow him. The first one who answered was… Well you’ll guess – Osmany Juanotrena. In his first official game for the Italian national team Osmany scored 14 points and he was voted the MVP of the match! It is worth mentioning that the top scorer was still Zaytsev with 20 points.

On the other side, Canada managed to take only one set at the start of the World Cup 2015, but the bigger problem for them is ankle injury of Graham Vigrass who had to leave the game already in the 1st set. We are about to see how serious the injury is.

Italy: Lorizio – We showed how strong...

PHOTO OF THE DAY: Oscar selfie of...