Reggio Emilia snatched another valuable player with Valerio Curti, a top quality player with experience who is expected to become one of the fan's favourites. 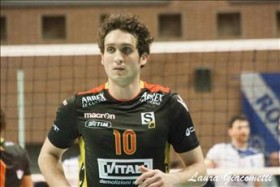 Born in Modena in 1978, he won an Italian Cup A2 with Loreto and played four unforgettable seasons with Cuneo, where he won the Cup in 2006. He moved to Verona in 2009 before going back down to the A2 division with Perugia. Finally, last season he played for Belluno.

CEV W: DOL for prelims of upcoming final round is completed in Ankara