CEV W: DOL for prelims of upcoming final round is completed in Ankara

The Drawing of Lots for the final round of the 2012 CEV Junior Volleyball European Championship – Women slated for this coming August 18-26 in Ankara was completed this morning in Turkey’s capital city. CEV Vice President and Jury President Jan Hronek attended the DOL together with Mr. Erol Ünal Karabiyik, President of the Turkish Volleyball Federation, Mrs. Sinem Mavili, CEV Vice President and TVF Secretary General, with quite many journalists and local TV broadcasters being also in attendance. 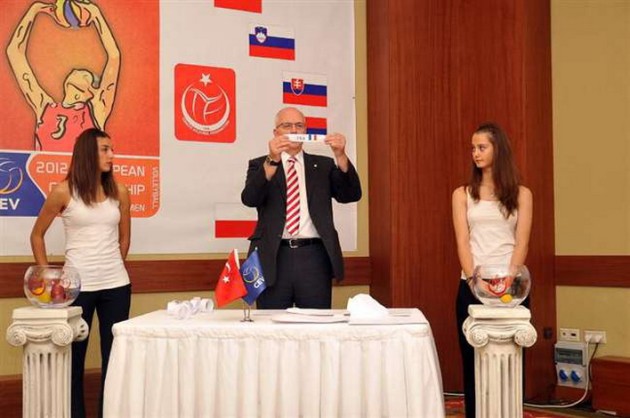 The DOL was performed by ESOC Secretary Nico Hoeben who was assisted on stage by two members of Turkey’s national team that will be vying for home glory in some weeks there in Ankara (see picture). The DOL assigned the 12 participating teams to two preliminary Pools whose composition reads as follows:

The teams ranked first and second in each Pool at the end of the prelims will play crossed semifinals, while those ranked third and fourth will be playing the classification matches 5-8