Italy beat Great Britain (27-25, 25-12, and 25-12) in the third round of women's volleyball preliminary matches at Earls Court on Wednesday to keep a perfect record of 3 wins in as many matches. Three Italian players finished in double digits – with Carolina Costagrande scoring 12, Lucia Bosetti and Simona Gioli contributing 11 and 10 respectively – while captain Lynne Beattie paced Team GB with 11. 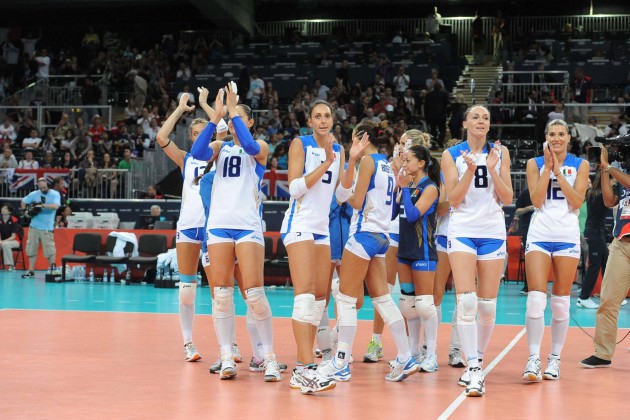 Italy was by far the stronger side in the second set. Lucia Bosetti and Simona Gioli joined Costagrande in hitting winners for Italy. Great Britain worked hard and Beattie stood out, but they lacked the defensive qualities shown by Italy’s libero Paola Croce. Italy won the set easily, 25-12.

The Italian dominance continued in the third set, as Del Core, Costagrande, Bosetti and Gioli fired home numerous spikes. As the world No.69 ranked side, Great Britain simply didn’t have enough quality to compete with the world No.4 and winners of the 2011 FIVB World Cup who shut out the set 25-12 to win the match.

Unbeaten Italy will play Algeria in the fourth round of preliminary matches on Friday, while Great Britain, who have lost two and won one, face the Dominican Republic.

Isernia back on track