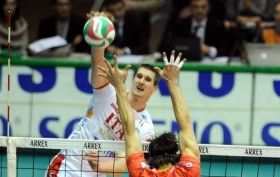 The first ever ‘Dolomiti’ derby between Belluno and Trento was sold out (2600).

Trentino jumped out of the starting blocks in a game they would win in four sets.

MVP: Stokr. Roberto Piazza (coach Sisley Belluno): “We cannot afford to start playing from the second set, we just gave away the first one, being too tense at the start. After that we played well, playing face to face and even doing better in the number of blocks, which shows the team played hard tonight. But in the end we made too many mistakes, Trento is a team that puts you under pressure and they push you to the mistake, but then when you work hard to get back and miss easy hits, that’s no good. We have a lot of work on and must improve quickly. We’re playing Macerata in three days, another tough test. Thanks to the fans, it was great to play with the packed arena”.

Emanuele Birarelli (Itas Diatec Trentino): “We did a good job tonight but we’ve had a bit of luck too against a team that does not miss much, and that is good in every area of the game. We started off brightly, then we struggled a bit as they became more aggressive, but we never put our heads down. And despite the fact I believe Belluno deserved something more out of it, we’re quite happy to take those three points, very important ones for us”.