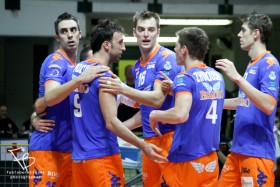 Cuneo celebrates Christmas with 3700 fans and a victory over Monza that came after just an hour and thirteen.

However, in the last action of the game, Gigi Mastrangelo injured his left ankle.

Leandro Vissotto (Bre Banca Lannutti Cuneo): “We are working well and we need to keep winning. I personally think I am improving game after game. It’s all a physical question, I haven’t had a minute to rest but thanks to the training I see my game is getting better”.

Emanuele Zanini (Acqua Paradiso Monza Brianza): “I think this was one of the worst games played so far. Credit to Cuneo which is a top team, and they proved it in the game against Trento. There is clearly a difference of level between us and them, but not the one seen tonight. We could have done better, both in terms of attitude and level of play. Some players lost their focus far too early and we cannot accept that”.