Buenos Aires, Argentina, December 26, 2011 - No doubt this has been the best year for all girl's and women's national teams, adding more international competitions for Argentina in the last years with reference to femenine teams. 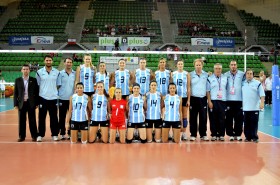 This perfect participation at the FIVB calendar for the Women’s Senior Team, added to the Youth competition in their World Championship make an incredible positive final balance.

Prior to starting the 2011 international season all teams realized they would have a very demanding calendar, starting with Argentine debut at the FIVB Grand Prix – the most important annual competition for Women’s Senior Teams of the World organized by the International Volleyball Federation – with Argentina qualifying at the 2010 Pan-American Cup.

But, it is good to start naming that participation.

Through out the Management of the Argentine Volleyball Federation, the Women’s Senior Team prepared a great friendly tour in the country playing v Great Britain, winning more than what it lost and with that experience travelled to Ciudad Juárez, in Mexico for the 10th edition of the competition where South American and strong Norceca teams face each other.

The most intensive match of that competition was the exciting 3-2 where Argentina defeated Peru for the fifth place and with that result, the light blue – white jersey team finished overcoming the South American rival at the International Ranking becoming the second best CSV team behind Brazil and therefore qualifying for the second FIVB Grand Prix 2012 even prior to playing its first one.

In August, it was time for the Debut at the FIVB Grand Prix in Poland, Bydgoszcz and Zielona Gora first and then in Thailand, Bangkok facing in 9 matches in three weekends the best teams of the World.

Surprising more than one, the girls won two matches one v Dominican Republic and the other v Cuba.